Posted on 13 September 2014 by Shyami
Another day – another plan – yes today we said we would start early, finish the aquarium, the toy museum, the musical instruments museum, the EU headquarters and though the original plan was to go to Antwerp, but we changed it so that we could go to Technopolis in Mechelen.
We woke up late again, went in to breakfast and was disappointed again. I was hoping that at least today I would see some change, well, I did see the change… there was no bacon today – only scrambled egg.. ah well…

We were late and we took the tram to the aquarium. We saw the basilica of sacred heart that was right there. Then we went across the road to go to the aquarium. We definitely were not disappointed. They had about 60 odd displays but some of the best I had seen. They had Newt, poison toad, a kind of blind fish and a whole pile of other fish and water animals that I had never seen before. They did something that was really really lovely. They had small stools in front of every display – the children could climb on it and see the fish. Also they could sit on it and draw or write on a sheet of paper and pencil that they had provided. What a wonderful way to keep the kids occupied. 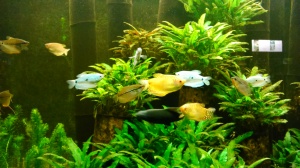 By the time we came out of there it was nearly lunch time. We had no time to go anywhere else other than Technopolis. So we rushed to the central station, grabbed a pasta box on the run and took the long distance train to Mechelen. We got off in Mechelen, and waited for the bus to go to Technopolis. On Saturdays the number of buses were less, had to wait for nearly half an hour before we got a bus. But inspite of all this, we had a great time.

Technopolis is the ideal place for kids interested in science. The next few hours we were there enjoying ourselves. Kids did all kinds of science experiments all on their own and running around from one thing to another and had great fun. If I have to think about it next time, I would suggest a whole day in Technopolis. We spent the entire evening there till they closed the place.

Then it was time to take the bus to the station and take the train back to Brussels, which we did. Once we reached, we were already drained and all we wanted to go to the room and sleep. But once we reached and refreshed, we realised we were hungry. So off we went to the local burger shop and got a couple of hotdogs and fries and let the kids run around in the play corner they had.

This entry was posted in Travelogue and tagged Belgium, Brussels, Travelogue. Bookmark the permalink.