Today we had decided we would visit Belfast! A week’s holiday in Dublin and it would be nice to take the kids to a new place. Not a overnight stay, just a day trip, but still well worth it. Though we knew Giant’s Causeway was out of question. I wasn’t going to wake kids up early just to cover a place. It would be Anou’s 9th country – UK! She is catching up on Abhinav!

We slept as long as we felt like, woke up had a nice breakfast and hit the road pretty late! But we were on the motorway right away and it we were flying past. We reached the Titanic museum about an hour and a half after we left, which was pretty good by any standards.

The titanic museum was expensive and we couldn’t spend the time required there so we wandered off to the docks and took pictures and we went off to W5 museum. Now we are becoming experts in telling you about Science museums in every country!

W5 was a good experience. Loved the pringles climbing frame. I got on too.. thanks to the guy who was at the frame who told me that I didn’t “look a day older than 16” 😉 Ah feels nice to get a complement like that once in a while! 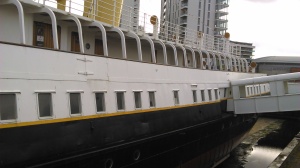 Next time may be we would spend more time there. Technopolis beats this hands down, but still this was fun of a different kind too. Much quieter than Technopolis, but probably only because it was a weekday and you wouldn’t expect regular tourists to be at a children’s science museum!

It was a quick visit but surely worth it!

This entry was posted in Travelogue and tagged Belfast, Northern Ireland, Travelogue, UK. Bookmark the permalink.