Status update : From a SAHM to a WFHM 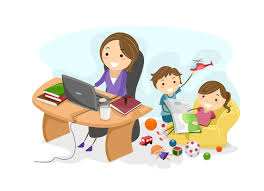 For the uninitiated the status update is “from a Stay At Home Mom to a Working From Home Mom.”

I’ve been officially working from home for the past couple of weeks and enjoying it. I never thought I would say this, but yes, I am actually enjoying this!..

Way back in 2008 when I decided to quit my job, I knew I had taken the right decision. Actually before I had my first child that I didn’t think I would quit my job and sit at home to take care of my children. I even went around looking at childminders and creches for my son so I could go back to work after the maternity leave. And then something happened! I had my little boy, spent six months with him and I didn’t want to leave him ever… not in a creche, not with a minder, not with a family member!

So, after my maternity leave was over, I continued to work from home. This went on for another few months till I conceived my second child and then I took the major life changing decision. I quit my job! After working for 14 long years, I never thought I would do it, but I did just that!

At that point in time, it felt right. I didn’t want it any other way. Over the past few years, I’ve been asked the question over and over again “How does it feel like staying at home after 14 years of working?” Well, I was way too busy taking care of a toddler and a pregnancy initially and then two babies under three! I was fairly busy and I had no time to think. Life moved on and at one stage people even forgot that I worked for years before becoming a stay at home mom.

While everyone questioned me about my time and how I managed to keep myself busy staying at home, no one ever asked me if I longed for adult company or for financial independence or if I missed the million other aspects of going out to work!

Now after nearly 6+ years of not working outside the home, I have started working again, though this time from home! The pay is about fifty times less than what I was earning before, but who cares! I am working again, I get to talk stuff other than kids and their meals and their tantrums and schools and a whole load of kiddie stuff. I am not complaining about talking kiddie stuff, but I missed having an adult conversation, about some random topic over a cup of coffee. I still can’t do it to the extent that I want, but I can at least talk to someone about my work and not children’s stuff. The thing is that I still talk about my children and love doing it, but I have a choice! It is the choice that I was missing.

Working is not about the work itself or even the money sometimes, it is about the confidence it gives you and the way it ups the self-respect straight away!

I am amazed how I can finish all the home and kids related work quite early and sit down to work or even the other way, finish my work before the family wakes up and spend my time with the  family for the rest of the day. I love the routine, I love being busy, I love feeling the way I do.

Yes, so officially I have moved from being the stay at home mom to working from home mom. Doesn’t matter if the 10 Euros that I get won’t be enough to feed me three square meals even for a day. I still feel proud of it and I am not going to let anyone to take it away from me.

This entry was posted in Random post and tagged SAHM, Stay at home mother, WFH, working from home. Bookmark the permalink.