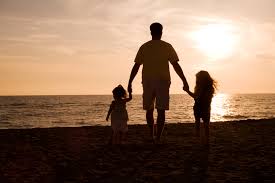 My husband has been out traveling with his friends for the past few days and my daughter told me today that even though she loved me a lot, there are things that she enjoyed doing with her father. I turned around and smiled. I know that I will never be a good story teller like him. I can play games with the kids, but not the way he does, or at least not the kinds of games he does. I can perfectly well understand why she misses him!

As a child and even now I notice how in many families children are always attached to their mother. The mother is the connection, the bridge between the father and child, doesn’t matter if it is a daughter or a son! Not sure if this is because the father is so busy trying to work hard and earn for the family that he has no time for his children or if he puts up a serious/tough face so that the rest of the family listens to him and respects him or if it is any other reason!

I wonder how these children miss this beautiful relationship.

For some reason, in my case I have always been close to my father, much more than my mother. It has always been easier to approach my father in a lot of things. Not that I was not close to my mother or anything. I would tell her a lot of things, which I might not have told my father. But there was a special bond between my father and me. Again, it is not that I listened to him blindly or he said “Yes” to everything that I said.

We have had disagreements in everything from what I should study to who I should marry to where i should work! At 41, I complain to him that he still treats me like a baby and he still calls me to remind me about a hundred different things he thinks I need reminders for, and we end up arguing about it!

Even now if I am at my parent’s home and my father calls from outside, I have to talk to him for a couple of minutes at least before I hand over the phone to my mother. Unless he is in a hurry to talk to my mother of course.

Over the years when I moved to a hostel he used to write to me every day and call me regularly as well. When letters gave way to e-mail sometimes there were as many as four or five emails a day too and if he didn’t get an e-mail from me for a couple of days he would call me to find out if everything was ok.

Over the years, the bond has only strengthened and even after me becoming a mother of two children I still make it a point to talk to him regularly even if it is just two words. Sometimes people find it funny and strange that I call him nearly every day. But that is me and that is the way I show my love and respect for him.

This entry was posted in Random post and tagged Father child relationship. Bookmark the permalink.