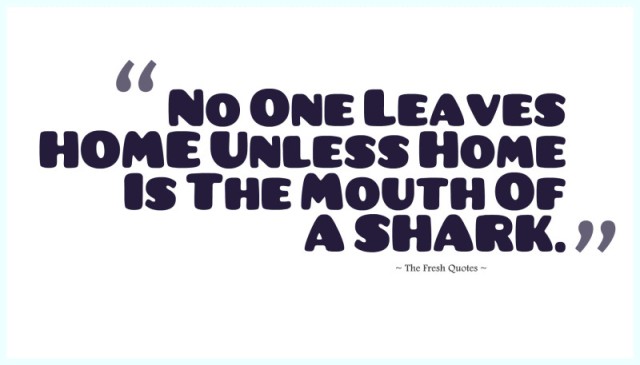 Today a friend who is always against Muslims was talking about Syrian refugees. While the rest of us were talking about refugees in general, she was pinpointing Syrian and Bangladeshis in particular and how they are the root cause of all the problems.

I wonder what makes people talk like this. I feel sorry for human being like her and apologise on her behalf to the rest of the world. Somehow they do not recognise the crime that happens locally, the rape, the robberies, the murder and blame the refugees for everything.

I have worked with refugees before and one thing I can tell you is, nobody wants to be a refugee. They would happily live in their country, their home, their land if they were allowed to. Who would want to run away from the comforts of their home to be a refugee? Nobody becomes a refugee by choice!

To those people that talk, I know no amount of talking is going to change your mind. But I do want to share something that I came across when I used to work with the “refugees”. There was this particular family. Should have been like any of us, a lovely family of five – mother, father, a son and three daughters! The only mistake that they did was to be in the wrong place at the wrong time! Tamilian family in Srilanka. The mother, father and brother got killed (chopped to pieces). The parents did one sane thing by putting the two little girls in an orphanage.The poor sisters grew up in the same place without knowing they were sisters. The one sister that was at home was taken by a relative to the country where I lived, then the two sisters were moved to this country. Won’t give you more details. But I can tell you, I have sat with this family through social security guys, through court cases and through counselling with a psychologist! I can tell you that they were normal families like you and me, if they were let to live their life they would have been much much happier than being a refugee in a country where they didn’t speak the local language, they didn’t have any family and where they had to depend on others for everything!

I think the root cause of all the problems is such people who are full of hate for fellow human beings!

This entry was posted in Random post and tagged Hate, Refugees. Bookmark the permalink.