So, the day before yesterday was roasting hot. We were all loafing around in our shorts. We were hoping the weather would remain the same at least until the weekend. Met Eireann said spring was around the corner finally.

Based on all that we were dressed in light clothes (but knowing Irish weather, I had a thick jacket over my sleeveless top, kids had full sleeve t-shirts under their think jackets). Only when we stepped out of the car at the train station did we realize how cold it was. It was quite windy (Thanks to yet another storm).

We got on the train and headed out to Dun Laoghaire, changing trains in between at Pearse. The three of us were lost in our own books. When we reached we knew we were early. Google maps said clearly “The National Marine Museum will not be open when you arrive”. Very smart! We dawdled on for a bit, enjoyed the cherry blossom trees in full blook, views of the pier and then reached the destination with more than a quarter of an hour to spare.

Kids found a book each to read. I wanted to read a book too but the views were beautiful so decided to spend time taking pictures rather than just read. More of “live in the moment” thought. It was quite misty and it just proved that the Irish weather is consistently inconsistent.

When it was the time we left the books to go and join the crowd at the museum. The museum was small, inside an old church. But it was very informative and we loved the exhibits. There was even a quiz sheet which we got to do.

Guess what this is?

This is called a stick map. Learnt it from my children today! Supposedly the sticks are wave patterns and the shells are islands and this map is from Polynesia/Marshall islands/Indonesia. Reminds me how much I have to learn still.

Some pictures from the museum,…

The kids read somewhere that there was a quiz sheet and got that and started wandering around doing the quiz. The one hour time wasn’t enough for us. We could have sat there for another couple of hours and enjoy and learn much more.

But the plan for the others was to walk to one of the Martello towers. Which was 2.3 kms walk from where we were. The weather had turned lovely inspite of what it was in the morning. It was still windy which made it nippy, but the sun shone really bright. The walk was fun, with kids running and picking stones and shells off the ground, the adults chatting away and some taking pictures. 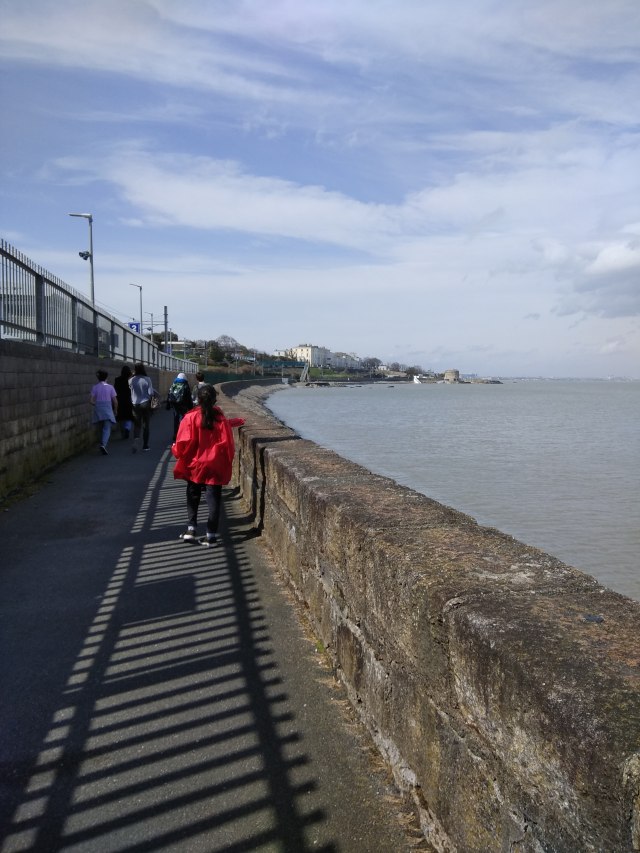 Once we reached there everyone had something to eat to get their sugar levels up. There were people outside swimming and even just sitting on the wall and watching them was fun.

We did a quick tour of the martello tower and were amazed by the size of the cannon tools and the thick walls and the story behind it. We couldn’t go up the tower because it was well and slippery, we hope to get back there in summer to check the upstairs bit.

After the tour, while I wanted to go home, my kids had other ideas. They had read half a book in the morning so decided to go back to the library to finish reading the book. So we walked back the 2.3 kms again. This time stopping to skip stones in the sea, collect stones and shells and sea glass and playing and taking pictures. It was so much fun. We realized we need more practice to skip stones!

We finished reading our books and we had fun with Sophie the dog in the library who other children were reading books to. We borrowed some more books from there and took the train and bus back home. It was more than 6 pm when we came home and the kids got lost in their books again.

Sometimes even our planned days have unplanned bits added to it to make it so much fun.

7 Responses to Our random day